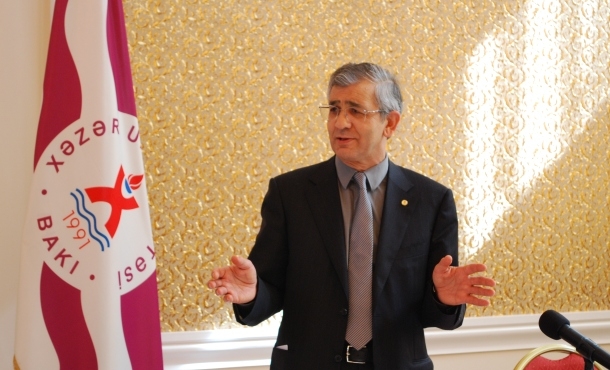 For a complete bibliography of Dr. Isakhanli's writings as well as works written by others about him, please see Scholar, Founder, Poet: Bibliography.

1979 - present: Visiting Professor and conference participant at various universities and research centers around the world

1991 - present: Organizer of a various international symposium and conferences

2005: Member, Education Commission under the President of the Republic of Azerbaijan

2010: Chairman, Board of Directors and Trustees, Khazar University

1976 - 1983: Research articles included into lists of the most outstanding scientific research in the USSR, published annually by the National (Soviet) Academy of Science, Moscow

1994 - London Debret Encyclopedia "Who is Who in the Former Soviet Union?"

1994 - Y. Mamedaliyev Award, in recognition of contributions to science and education, Baku, Azerbaijan

2010 – Co-founder and Member, Board of Directors, Karabakh Foundation, USA

2010 – “Jafar Jabbarly” (Cəfər Cabbarlı) Award, in recognition of contribution to publicity of classic and modern Azerbaijani Poetry, to compile a multi voluminous "The Azerbaijani LovePoetry"

2010 – National “Khazar” Award, in recognition of contribution to development of Azerbaijani Education and to founding of the University which meets international standards

And various other awards and recognitions.